Monk incorporates various mediums into her works, combining music, dance, film, and performance art. Above, Monk’s 16 Millimeter Earrings combines film and music. The piece features projection (2:24) and is a film in itself, Monk’s first, as well as her first vocal score, and first “union of voice, movement, and costume.”1 Another example of Monk’s interdisciplinary approach is her work Turtle Dreams, which also combines elements of voice, dance, and film. The use of film can be seen in scenes of a turtle, 16:28 in the clip below. Other films by Monk include Mermaid Adventures and Ellis Island, both created to be screened during performances of other works by Monk.

Monk also pulls architecture into her works, paying much attention to the space in which her works are performed. She often creates works in non-traditional spaces, away from the stage. For example, Monk’s Juice (1969) was the first piece created by an artist in the rotunda of the Solomon R. Guggenheim Museum, and Monk’s Vessel (1971) was performed at three sites around New York (and at three sites in West Berlin in 1981). Below, Monk’s piece Songs of Ascension is performed in Ann Hamilton’s tower. Throughout the twenty-one movement piece, Monk plays with the idea of “ascent” as both a metaphysical and physical journey, as seen by the performers climbing up the stairs in the tower throughout the course of the piece.2

Emphasis on Sound Over Syntax

Monk’s works often eliminate words without eliminating expression, and many of her pieces do not include clear spoken dialogue. Instead, the focus is on vocal effects and extended techniques.3 In other words, Monk does not rely on text. Instead, she relies on the voice itself as her instrument. This reflects Monk’s belief that the human voice is the first, universal instrument and, “allows for direct connection to the deepest level of energies and feelings for which we don’t have words.”4

For example, in Panda Chant II (1984), above, emphasis is placed on the sound of the word “panda” and vocal effects rather than grammatical meaning. The work starts with just the word (or sound) “panda,” initially using no other sounds, and, even as vocal lines are slowly added throughout the piece, they are not textual nor do they make grammatical sense.

Monk is known for, “training her own voice to do things no one within the traditions of her schooling had done before.”5 Her repertory of vocal techniques includes Amerindian-style vibrato, nonsense syllables, nasal singing, and sounds featured in Balkan singing, Tibetan singing, and other non-Western traditions.6

Above, starting at 6:05, Monk performs an a capella piece that emphasizes some of these extend vocal techniques. These types of sounds are common in many of Monk’s works, such as Songs from the Hill (1976), and reflect Monk’s interest in different ways of using sound and in using purely the voice as her main instrument.7

Use of Repetition & Ostinato

Repetition and ostinato are central to many of Monk’s works. In “Travel Dream Song” from Monk’s Atlas, above, an ostinato plays continuously, alternating between complex meters. It starts at the very beginning of the piece and continues throughout. 8 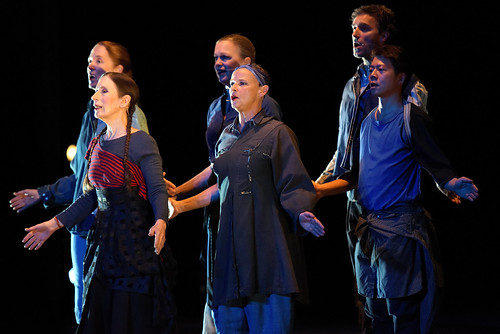 Monk often relies on oral tradition practices, passing musical lines along vocally and relying on rote memorization for ensembles, as opposed to using Western music notation. This allows others to learn music that would be “too difficult to learn if fully notated in all its rhythmic complexity.”9

For Monk’s early solo work, there was no need for music to be written down as there was no need to communicate the work to another performer.10 However, even for ensemble works, Monk dislikes Western musical notation because of its, “tendency to freeze forms that can be more flexible in live performance, and its limitations with respect to documenting shifts in vocal color and timbre.”

(In 2000, after much discussion she entered into an exclusive deal with Boosey & Hawkes for publishing pieces on a case-by-case basis.)11

Monk also relies on a unique ensemble; she doesn’t look for the traditional opera singer. For Atlas, she held workshops rather than traditional auditions, concerned with the balance of the group, the uniqueness of each singer, and allowing individuals to properly shine.12 Monk even founded her own ensemble, Meredith Monk & Vocal Ensemble, and has often worked with the same members over the course of her career. 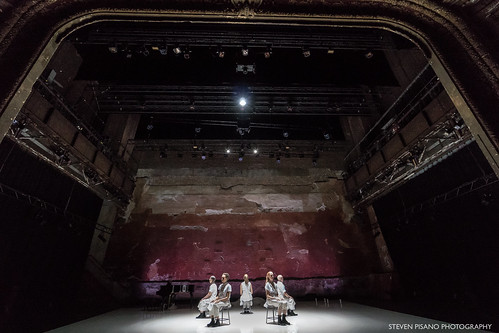 Monk’s works are often concerned with broader, worldly themes. For example, she explores fascism in Quarry (1976), the apocalypse in Turtle Dreams (1980-84),13 and a life and spiritual journey in Atlas (1991).14